Classes, Courses and Workshops with Beatrice Zancanaro
Browse all courses
Sign Up
Log In
Join as a teacher

From world-class rhythmic gymnast for the Italian national team to top level dancer for the largest show business companies around the world (Franco Dragone, Luc Petit, Notre Dame de Paris), Beatrice dedicated all her life to the study and research of the arts of movement and their nuances. She has worked world-wide for television and theaters, including live event with artists like Anastacia, Liza Minelli, Andrea Bocelli and more. Beatrice eventually reached the peak of her career by joining Cirque du Soleil for the first cruiseshjp live show tour ever created by the Canadian company, in 2017, starting as a dancer and ending as artistic leader.

Alberto found his calling when he was 12, the day he first admired the acrobats of the Guinness record winner musical show "Notre Dame de Paris". Many years of solo training will pass, but after creating his own live show company, Team Vertical Limit, and performing while training with inspiring performers around the world, Alberto developed his own style by mixing floor acrobatics with tricking, freerunning and stunts. He eventually joined "Fondazione Arena di Verona" for the international performances of the opera "Turandot" and finally achieved his childhood dream joining the international show "Notre Dame de Paris" as acrobat in 2016 till present day.

Beatrice doesn't offer any courses at the moment. Follow Beatrice to be informed about new courses. 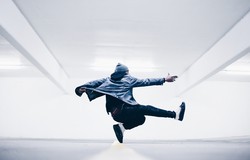 Beatrice Zancanaro has not been active yet.