Classes, Courses and Workshops with Claudia Karapanou
Browse all courses
Sign Up
Log In
Join as a teacher

Claudia was born in Salerno ,Italy and grew up in Greece. She started with ballet classes from the age of 4 and continued with artistic gymnastics in the city of Athens. At the age of 18 she moves to Thessaloniki and studies in the Cinema department of Fine Arts in Aristotle University. At the same time she absolved her teaching diplomas in Latin/ballroom dances and Argentine Tango. In 2009 she encounters flamenco for the first time, in the school of Marina Noti “A compás” and continues to the school of Niovi Benou and Flora Tsoukala “Pellizco”. Since then, she kept taking classes and workshops in Thessaloniki and Athens. In 2013 she moved to Malta, and gave flamenco classes in “Alegria Dance Academy” and performed as a member of “Alegria Dance Company”. In 2015 her great love for flamenco led her to Seville, Spain, the core of flamenco.She joined Ursula Lopez's dance School ,and in the meanwhile she took classes with many other dancers, such as Andrés Marin, Manuela Rios, Farruquito , Ana Morales, Rocio Molina, Juan Paredes, Maria Moreno, Irene la Sentío etc... She also took classes of compás, flamenco singing for dancers and flamencology. Claudia lived and worked as a flamenco dancer in Seville for 5 years. She has performed on many stages in Spain, Greece, Malta, Switzerland and the Netherlands, collaborating with many artists of the flamenco scene, and giving classes and workshops. She also runs “Zenith Estudio Creativo”, in Seville ,a studio where artists can create, rehearse and perform. Since September 2019 ,she is based in Rotterdam and is actively performing and giving classes.

Claudia doesn't offer any courses at the moment. Follow Claudia to be informed about new courses. 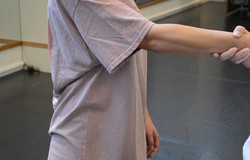